Algae for Food and Green Jobs

Growing the blue-green algae spirulina, an increasingly popular “superfood,” doesn’t just yield a nutritious dietary supplement. It also combats climate change and, due to advances in the way it’s produced, can give individuals with limited resources a new way to generate income.

“Spirulina is packed with protein, vitamins, and minerals, and can make a real impact on food security and sustainability,” says Saumil Shah, the founder of EnerGaia, a company that grows the microalgae in more than a thousand bioreactor tanks across Thailand, Singapore, and India. “We want to democratize spirulina awareness, production, and consumption.” 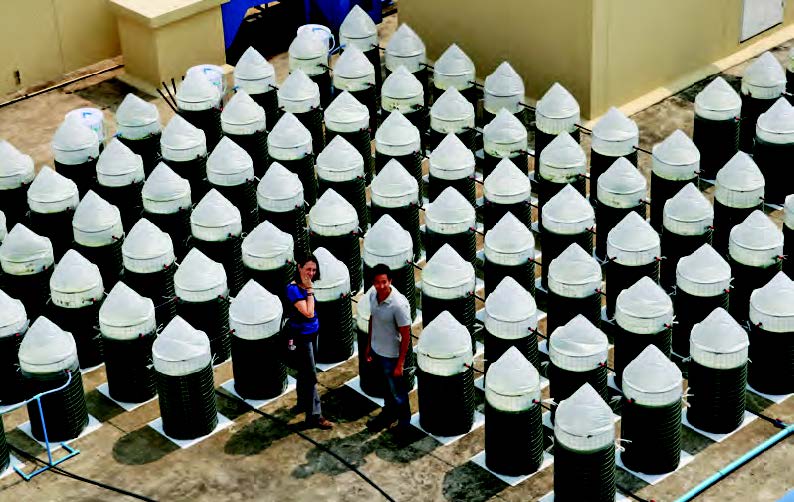 EnerGaia produces three tons of spirulina a year, processes it, and sells it, mostly to food manufacturers, who use the microalgae in their products. The company also helps farmers set up their own bioreactors to produce spirulina for personal consumption and sales. The goal is to make the nutrient-filled algae, which looks like a dark green paste in wet form or a powder when dried, more accessible and affordable.

Shah, an American engineer who lives in Bangkok, was inspired to start EnerGaia in 2009 when he learned that farming the algae—which requires only carbon dioxide, water, added nutrients, and sunlight to grow—was an effective way to take the greenhouse gas out of the atmosphere.

Shah’s first large-scale effort to do so used emissions directly from a rice mill. But when the facility was demolished in 2011, the company struggled to find another way to source industrial carbon dioxide in a way that was economically viable. Instead, Shah adopted a more flexible approach, moving the bioreactors that the company used to grow the algae to a range of underused or abandoned industrial and urban spaces that filtered carbon dioxide from the air and helped businesses and landowners get more value out of their property at the same time.

While most producers grow spirulina in open ponds, EnerGaia has made the process more efficient by custom-designing its own bioreactors — sets of interconnected white barrels that aerate and pump the algae and fluids between them. The process is automated, meaning that the grower can monitor it from a smartphone and be notified immediately if growing conditions (such as temperature) stray from ideal settings. Automation frees up time for the grower to take on other jobs. “No one has ever brought automation technology to the spirulina growing process before,” Shah says.

In Thailand, where the bulk of EnerGaia’s operations are located, the company has set up its bioreactors on three roof-tops and one “farm” that formerly housed a timber yard. Later this year, EnerGaia plans to start growing at a hospital in Singapore and to give the facility 10 percent of the spirulina produced to feed patients.

Although interested individuals must purchase their own bioreactors, EnerGaia offers on-site training at no charge. The company is also working with various NGOs to set up microfinancing programs. Shah says that with the help of these programs, a grower could pay off the cost of 10 to 20 bioreactors in two to three years (assuming earnings of about $1,100 a year from sales).

In India, the first group of farmers using EnerGaia’s equipment is currently producing algae in 64 tanks for their own consumption. Eventually, however, EnerGaia hopes to help them scale up operations to 1,000 tanks and purchase the leftover harvests. This will help EnerGaia meet increased demand for spirulina products, which surged in the past year as more people became aware of its health benefits, Shah says.

“The algae product market is expected to reach over 44 billion [dollars] in the next five years,” says Monica Jain, a business consultant who founded Fish 2.0, an international business competition for emerging sustainable seafood and aquaculture startup companies. “It’s being recognized as a super-food. Producing algae for food is strategically a great place to be because it’s high value — higher than when used in biofuels or for pharmaceuticals.” EnerGaia’s socially oriented business model reflects a growing awareness that marine products such as algae offer underexplored opportunities for positive social impact, she adds.

Bangkok resident Manasak Nipanprasat is the site manager for growing operations in Phra Pradaeng, EnerGaia’s largest location in Thailand. “I wasn’t able to go to college,” the 24-year-old says. “But by work- ing at EnerGaia for the last four years, I learned how to solve many problems in growing spirulina. Now I am able to teach others the same skill.”